Student commutes 1,000 miles to University of London from Poland to save money on rent

WITH London house prices at a high, one university student has decided to commute from Poland to London in a bid to save money on his rent.

Student, Jonathan Davey discovered that instead of living in the capital whilst studying for his Anthropology degree at Goldsmiths, University of London, it was in fact more cost-effective for him to commute to lectures from Gdansk, Poland.

Jonathan, originally from Hampshire made the decision to commute the 1,000 mile journey when he discovered that renting a room near his University of London could cost him up to £220 a week.

After travelling Europe last year he put his experience to good use and spent several hours researching flight costs and departure times to London from affordable Eastern European cities. He found that Gdansk, Poland was the cheapest option for him.

He now has pre-booked return flights, buses to and from the airport and the rent in Poland is said to be costing him just £2,100 a year.

Jonathan has lectures Wednesday, Thursday and Friday. He leaves home in Gdansk and flies to Luton at 6am on Wednesday and because of the time difference he arrives in time for his 10am lecture. He then flies back to Gdansk where he stays in a hostel with other travellers and back-packers for £35 a week.

“Flying backwards and forwards every week makes life feel a bit like a permanent holiday.”

Speaking to The Mirror, Jonathan said:

“It’s hard to believe it’s cheaper to commute 1,000 miles than live just round the corner,”

“But the cost of living for students is crippling.”

“I’m thousands of pounds a year better off living in Poland.” 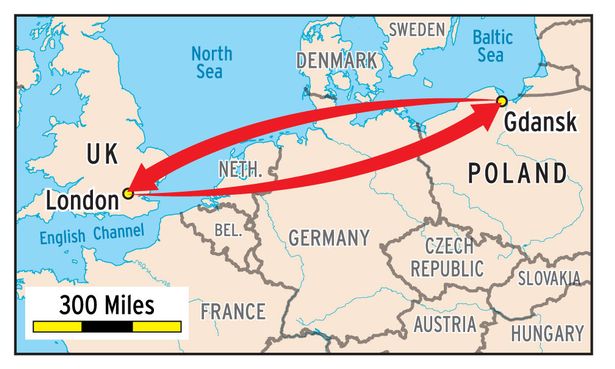 The two nights of the week that Jonathan is in London he spends on friends’ sofas, or in cheap hostels.

His parents think he’s mad, but he has said “I’ve shown them the figures and they can see I’m saving a fortune.”

If you were a student studying in London and your rent was to high, would you consider living abroad and commuting to University?

Here are our favourite storage ideas to your student bedroom.

Moving in can highlight teething problems, here is our guide to help smooth these out.